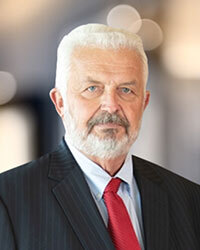 Orlando Federal Criminal Lawyer Rick L. Jancha graduated, with Honors from the University of Notre Dame Law School in 1977. He was admitted to the Indiana and Michigan Bars in 1977, and to the Florida Bar in 1993.

Rick Jancha started his legal career as a criminal defense attorney. For nine years he defended drug trafficking cases, white-collar cases, and numerous homicide and death penalty cases. He was co-chair of the Criminal Law Section of the local county bar association.

In 1986, Rick L. Jancha was recruited by the Department of Justice to head up its Organized Crime Drug Task Force in South Bend, Indiana. In 1989, Mr. Jancha transferred to Orlando and continued his role as an Organized Crime and Federal Narcotics Task Force Attorney.

Due to Rick Jancha’s superior legal and trial skills, he served as the Managing Assistant United States Attorney in the United States Attorney’s Office in Orlando for five years, where he was responsible for approving and supervising all criminal prosecutions. For two years, he served as Chief of the Narcotics Unit for the Middle District of Florida where he was responsible for supervising every major federal drug prosecution in 35 Florida counties which comprised the entire United States Middle District of Florida. He also worked with the White House and Congress in obtaining Central Florida’s designation as a High-Intensity Drug Trafficking Area. He served as Chair and Vice-Chair of the HIDTA’s Executive Committee, overseeing the development and implementation of the law enforcement initiatives for sixteen Central Florida law enforcement agencies.

After years of handling some of the most high-profile federal prosecutions, he retired from the government in 2007, after a 21-year career as a federal prosecutor, and joined NeJame Law. Returning to his roots as a criminal defense attorney, Mr. Jancha, with his vast knowledge and experience, became a partner with the Firm and was its premier federal defense attorney, managing its Federal Criminal Division. Mr. Jancha left the firm for a period of time, to establish his own law practice.

Mr. Jancha left NeJame Law to become of-counsel to his former partner at NeJame Law, Rajan Joshi. Mr. Joshi met Mr. Jancha while both of them were law partners at NeJame Law. Since 2017, together they handled numerous high profile and serious cases successfully in State and Federal Court. They have achieved phenomenal results for their clients and are an amazing team.

Due to his extensive experience and expertise in the handling of complex criminal cases, attorney Rick Jancha has consistently been sought out for his assistance to various federal, state, and local law enforcement agencies as well as for victim advocacy groups. He has instructed members of law enforcement, other federal and state prosecutors, and international law enforcement personnel concerning the handling of cases involving international drug trafficking, money laundering, the investigation of computer and white-collar crimes, utilization of wiretaps, and the prosecutions of cases involving improvised explosive devices (bombs).

Federal Criminal Defense Attorney Rick L. Jancha also has extensive teaching experience in the international arena. On numerous occasions, he has worked with the Department of Justice and Department of State in the International Programs Section for the Federal Law Enforcement Training Center in Glynco, Georgia. He has taught judges, prosecutors, law enforcement, and various banking officials in St. Petersburg, Voronezh, Khabarosk and Moscow, Russia, Tashkent, Uzbekistan, and in Vilnius, Lithuania. Most recently, Mr. Jancha assisted the United Nations in its efforts to set up an interim government and legal system in Pristina, Kosovo by reviewing and teaching the new criminal procedure code and criminal laws to members of the interim government and all participants within its judicial system.

Mr. Jancha has personally handled more than 100 federal wiretap applications. His knowledge and experience in the proper procedures to obtain and use “wiretaps” in court proceedings is an invaluable resource when providing our best representation to our clients. With his almost unparalleled vast experience in all aspects and areas of federal criminal law, Rick Jancha, is a legend Orlando Federal Criminal Defense Attorney, with a thorough understanding and mastery of federal criminal cases. Mr. Jancha’s reported cases are as follows:

If you are in need of a Florida Federal Defense Attorney who specializes in federal criminal cases throughout Florida, and the United States, contact Rick Jancha.

Rajan is an awesome lawyer that treats his clients like family and defends you to the fullest. When he enters...

Mr. Joshi won our case, he can do the same for you! We previously had spent thousands of dollars hiring...