Joshi & Schisani Law Firm, PA  is a HIGHLY-SKILLED AND DECORATED TRIAL LAW FIRM serving the KISSIMMEE community with the highest integrity and honor! Criminal Defense Attorney RAJAN JOSHI has been featured on HIGH-PROFILE news programs such as… 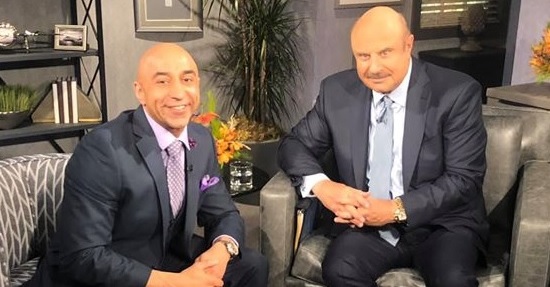 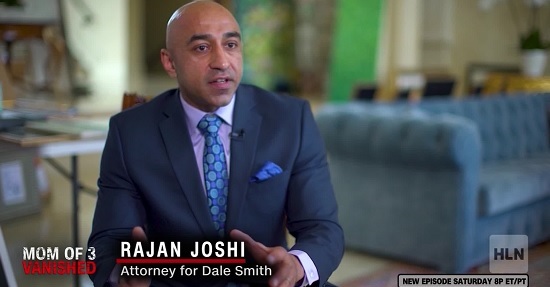 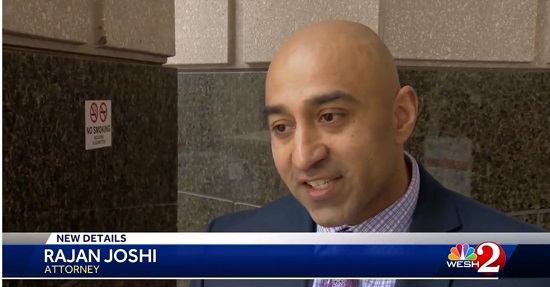 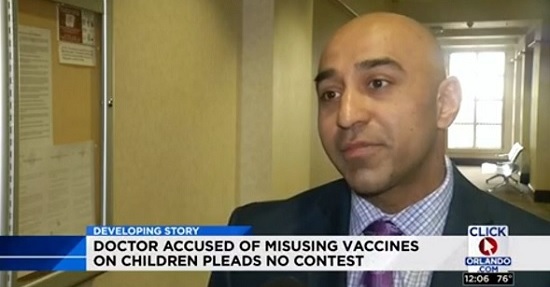 Attorney RAJAN JOSHI has been featured on such shows as...

Attorney RAJAN JOSHI graduated from the University of Florida College of Law in 2000 with HONORS and demonstrated his academic excellence by earning the highly coveted BOOK AWARD IN CRIMINAL PROCEDURE (highest grade). Rajan Joshi further proved his knowledge of law by scoring among the TOP FIVE HIGHEST SCORES IN THE BAR EXAM for the entire State of Florida.

Attorney Joshi started his career as an Assistant State Attorney in Jacksonville, Florida where he developed his trial abilities during his 4 year tenure. Mr. Joshi was recognized for his performance by receiving the JURY TRIAL AWARD in 2003 for trying the most jury trials in the office. After his tenure at the State Attorney’s office, Mr. Joshi worked for an AV RATED (top ranking) law firm in Jacksonville for two years and then moved back to Orlando and was soon hired at the prestigious Nejame Law firm. His legal talents were quickly recognized and within his first year became a Partner with the firm. While at the firm for over eight years, Rajan Joshi handled many high profile cases which received local and national media attention. In 2014, the National Trial Lawyers Association recognized Mr. Joshi as one of the TOP 100 TRIAL LAWYERS. Mr. Joshi has an Avvo rating of 10 (Highest Rating) and is ranked as a Superb Lawyer. Based on the extremely positive testimonials from multiple clients, Mr. Joshi was awarded the the AVVO CLIENT’S CHOICE AWARD in 2015.

Mr. Joshi left Nejame Law in 2015 to become the Founding Partner at Joshi Law. Mr. Joshi strongly believes that anyone charged by the State or the Federal Government needs an aggressive defense and does everything he can and hires the best legal staff to ensure that his clients are protected with the Rights the Constitution has provided. Joshi & Schisani Law is truly HERE TO PROTECT YOU.

The Joshi & Schisani Law Firm is dedicated to protecting your rights and ensuring you get the the fair treatment you deserve.

From deportation defense to family immigration, let the Joshi & Schisani Law Firm guide you through the complex U.S. immigration laws.

Practice Areas for our Attorney's serving the Kissimmee area include DUI, drug offenses, assault, battery, and much more...

It is very important to do your research when deciding to hire a law firm to defend you against assault charges, as these charges can be significant…

Due to the complexity of burglary cases and the potential consequences of a conviction, the skills of an experienced law firm is highly recommended…

Getting arrested for Driving Under the Influence (DUI) can bring on difficult times, but with an experienced legal team on your side it can help mitigate some of your fears…

Our law firm has successfully helped many clients, who have unfortunately found themselves facing legal trouble, particularly with theft…

If you or a loved one has been accused of committing a robbery, the legal team at the Joshi & Schisani Law Firm is here to help you…

If you are accused of any sex offense, it is highly encouraged that you seek the services of an attorney immediately…

Rajan Joshi In The News 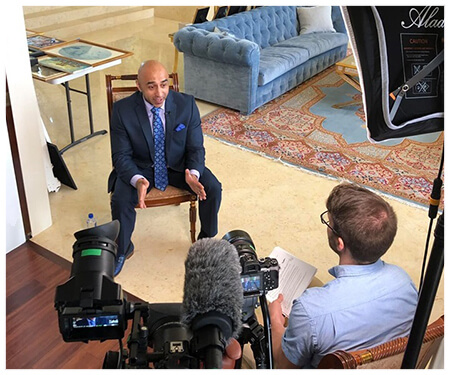 Attorney Rajan Joshi of the Joshi Law Firm, PA discussing how his firm helped his client make sure that all her patients are safe and properly treated.

Mr. Joshi on Behind The Law

Mr. Joshi on Behind The Law while recording at BUD 94.1 FM discussing criminal law and the Noor Salman trial.

Attorney Rajan Joshi steps in to help a teen charged as an adult with trying to hire people to kill her parents.

My experience as a client of Mr Rajan Joshi has been extremely satisfied and justifiable within the constitutional laws per our founding four fathers. Mr. Joshi would be recommended by me to anyone Whom seeking justifiable legal service. Mr. Joshi displays eagerness, one on one time with his clients and goes above and beyond the need for seeking constitutional rights. As a extremely satisfied client I again would recommend when seeking out a good lawyer contact Mr. Rajan Joshi’s law firm.

This is an amazing lawyer among the best in the world. He’s a lawyer that truly cares about your best interest and he diligently attacks all options possible. He’s brilliant and really knows his stuff. He’ll fight for you right down to the wire. I am glad I hired him. He’s trustworthy, ethical and has a strong personality. 5 star

I had the pleasure of working with rajan for around 9 months during my case. I would highly recommend him. He takes the time to answer your calls and concerns and in my case worked non stop on my case. He is very intelligent but also down to earth. Rajan truly cares and I consider him not just my attorney but my friend. He’s one of a kind!

He worked extremely hard on my husband’s case and he won the case. The Florida statute was found unconstitutional and he even worked my case with the Supreme Court whom also agreed with the decision and charges were dropped. He did not do what most lawyers do which is cop out a plea. He worked endless hours to prove how stupid this charge was and the result was great. I recommend him 150%. He works your case to be dropped and not be be a cop out. Now that is a good lawyer!

Yeliza Fernandez
20:19 17 Feb 21
One of the best defense lawyers in central florida, Christopher Schisani handle both cases he did a great job. This will be our family lawyer for many years to come 🙂

Kelly Purvin
20:42 17 Jul 19
It is invaluable to have absolute trust in the person that is legally representing you, as well as having peace-of-mind during trying times in life. Having Rajan Joshi as my counsel was the best decision I ever made, during one of the scariest legal scenarios I had ever encountered. I could not be more appreciative of his services as well as the lifelong friendship that has been established throughout the process.

Blessed Enough
09:18 02 Jul 19
I feel blessed to have Joshi Law Firm resolve my case quickly. Mr.Rajan Joshi and his team One of the best law firms to come across. Very professional and efficient with their work.It was overall a very pleasant to have Joshi Law firm for legal matters.I would highly recommend.

Joe Maguire
12:22 15 Nov 18
Very Satisfied Customer. Mr. Joshi showed compassion, empathy and professionalism handling the case. I could always contact him at anytime and ask a question, and he was always there with the information i needed. This is the second time i have used Mr. Joshi and he is very highly recommended. You will not find another attorney with the drive, determination and know how of the judicial system like Mr. Joshi. He has worked as an attorney and prosecuter, and it shows in everything he does and says. Thank you Mr. Joshi.

Josh Frick
20:57 03 Oct 18
Rajan is very smart, hard working, and knowledgeable. He has a great track record and I highly recommend him.

Bamboo Tattoos Inc
22:06 07 Aug 18
Mr Joshi and his team One of the best law firms to come across. Very professional and efficient with their work and take exquisite care of their clients

B & S Music Entertainment LLC
17:14 25 May 18
Outstanding lawyer. Mr Joshi is very helpful and humble. He is definitely the right lawyer for domestic voilence cases. I highly recommend Mr. Joshi.

Rosabelle Davis
22:49 18 May 18
Joshi Law was fantastic. He represented a family member while I live out of state and was able to answer all my questions and always responded promptly when new questions arose. Very easy to communicate with and very down to earth in his explanations. As a concerned parent I was very confident in his ability. Not only would I recommend him and his firm but I have other legal matters that will be coming up in FL and have every intention of using his firm again.- Joe K, NY

Taranjeet Singh
06:09 06 May 18
Great lawyer, He explain to me the process of my case and answer all my question and always making sure I understand the process and updating via email or call ,I'm very happy with his services. Excellent lawyer.Highly recommended...

Carolina M.
01:24 08 Mar 18
Hands down, the best defense in town. Accessible, analytical, creative, competent, diplomatic, experienced, VERY hardworking, reasonable, relentless, well researched, etc. Mr. Rajan Joshi’s excellent interpersonal, and leadership skills are unequivocally displayed by the (undeniable) efficacy of his staff. Mr. Joshi has done his homework in this area, and it shines through the synergy that is consistently displayed by his team. Each document that is drafted by Mr. Joshi, along with his staff, is impeccable. The team at Joshi Law Firm not only comprise the aforementioned qualities, but each member abides by the principles within the ethos that Mr. Joshi has created for his firm. Mr. Joshi is extremely gifted in communication, as demonstrated by his ability to clearly explain complex legal concepts to his existing and potential clients, while eloquently articulating, and presenting, sound evidence during professional proceedings. My personal experience with the staff at Joshi Law Firm has inspired a more positive personal reflection for, and within myself; this has come about as the result of the exemplar representation by Mr. Joshi, and his staff.
See all reviewsWrite a review

Rosabelle Davis
22:50 18 May 18
Joshi Law was fantastic. He represented a family member while I live out of state and was able to answer all my questions and always responded promptly when new questions arose. Very easy to communicate with and very down to earth in his explanations. As a concerned parent I was very confident in his ability. Not only would I recommend him and his firm but I have other legal matters that will be coming up in FL and have every intention of using his firm again. - Joe K, NY
See all reviewsWrite a review
powered by Facebook