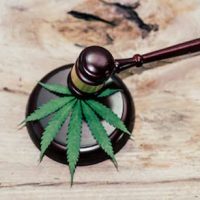 Marijuana legalization is a growing trend across the United States, where total cannabis sales increased by 38% in 2021 over the previous year. Some estimate that legal cannabis sales will reach $30 billion in 2022, as more states move to decriminalize and legalize recreational cannabis possession. However, while recreational marijuana is currently legal to possess in 19 U.S. states, Florida is not one of them.

While Section 381.986 of the Florida Statutes allows medical use of marijuana, cannabis remains a Schedule I controlled substance, and it is a crime to possess any amount of marijuana without a prescription from a doctor.

Penalties for Marijuana Possession in Florida

Possession of 20 grams or less of marijuana is considered a misdemeanor offense, with penalties up to 1 year in jail and $1,000.00 in fines.

Possession of more than 20 grams can invite felony charges and up to 5 years in jail, with fines up to $5,000.00. Conviction on a marijuana charge can also bring about suspension of your driver’s license and other sanctions such as random drug testing.

Other consequences of a marijuana possession conviction could include:

These are long-lasting repercussions that go well beyond a jail term or court fine. It is imperative to fight your case and avoid these issues whenever possible.

What is “Possession” of Marijuana in Florida?

In order to prove the crime of possession of cannabis, the prosecution must prove three distinct elements:

Put simply, the State must prove that the person possessed cannabis, and they had knowledge of this fact.

Actual possession of a drug, under Harris v. State, 954 So.2d 1260 (2007), means the drug being in the hand of the accused, in a container in the hand of the accused, or being in such close proximity as to be within ready reach and that is under the control of the accused. In other words, the substance must be “on” the person and they cannot be merely in proximity of a controlled substance. The Defendant having exclusive control of the illegal substance is critical, and the Prosecution must prove that to obtain a conviction.

Constructive possession of marijuana, on the other hand, means:

The Prosecution bears the burden of proving either actual or constructive possession to convict on a marijuana possession charge. These elements aren’t as easy to prove as they may seem. If charged, you owe it to yourself to prepare the best defense possible and challenge the Prosecution’s allegations. This starts with consulting an Orlando drug possession defense firm that knows the law and has fought vigorously for many people in your situation.

Changes on the Horizon?

Polls indicate that over 60% of Americans favor legalization of marijuana for both medical and recreational use. Floridians are in on this nationwide trend, with both State Legislators and activist groups lobbying to legalize recreational cannabis in Florida, either by legislative measure or ballot initiative.

The day may come when it is legal to possess marijuana for personal, recreational use in Florida. But that day is not here, and it remains a crime to carry even a small amount of cannabis without a medical prescription. The effects of a marijuana possession conviction can be damaging, so you can’t leave anything to chance.

At Joshi Law Firm, PA, we understand that even a seemingly minor drug possession charge can carry serious penalties. We know the law, and what a prosecutor must prove in these cases. To start building your defense strategy,  Contact our Orlando drug crimes lawyers for a consultation.

By Joshi Law Firm, PA | Posted on March 14, 2022
« Driving With A Suspended License In Florida – Penalties And Defenses
Self-Defense Under Florida Law – What Is It And How Can It Help My Case? »